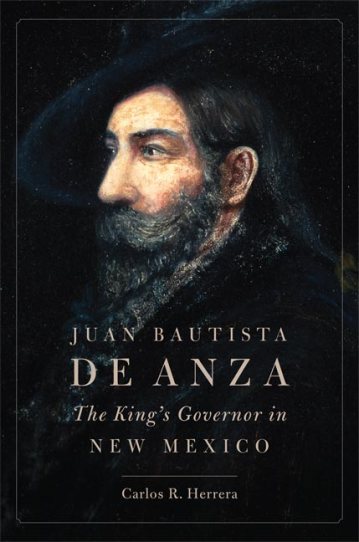 The author’s publishers call this book the first comprehensive biography of Juan Bautista de Anza.  Early reviewers have described Dr. Herrera’s effort with strong phrases: exhaustive archival research, comprehensive, cradle-to-grave, highly significant, penetrating, and most thorough.  Herrera makes an acceptable case for Governor Anza as a pivotal administrative figure for the Spanish Crown in making peace with hostile Comanches and Apaches and gaining more security for Spaniards and their Pueblo allies. The book is worthy of those accolades and will, without doubt, become a welcome addition to many libraries, from individual collectors to schools, colleges, and universities. Proponents of the National Trails System will be gratified by mention of the 1990 Congressional designation of the Juan Bautista de Anza National Historic Trail, commemorating Hispanic contributions to U. S. national history.  Special tribute is paid to the work of the late Don T. Garate, of Tumacácori, Arizona, NPS interpreter, scholar, historian who brought Anza to life for many through living history reenactments before his untimely death in 2010.

Herrera cites the appropriate references, past and present, and in addition to the very readable chapters, fascinating information is found in the notes.  Of particular interest is one that sheds light on the controversy that has surrounded a portrait of Anza since 1921 when an Anza family member (James
Ainsa, as spelling of the name has evolved) allowed Professor Herbert Eugene Bolton to publish the painting in his 1921 Spanish Borderlands book.  The painting may, or may not be Anza; it may, or may not have been painted in Mexico City in late 1776 when Anza arrived there, “a famous and celebrated man,” just prior to his appointment as Governor of New Mexico.   Passed on in the Anza family, a descendant donated the portrait in 1970 to the Palace of the Governors in Santa Fe.  In 1994, the painting was takento Mexico City for x-ray and pigment analysis of the portrait, but that was inconclusive.  Current thinking
places the date of the painting in the late 1880s or early 1900s, possibly done as a copy of a lost 18th Century original.  The familiar portrait serves well as the dust jacket cover of the book.

Herrera provides logical divisions of the book:  Part I with three chapters that provide setting, background, life and accomplishments in Sonora, present-day Arizona and California; Part II with five chapters detailing Anza’s ten-year stint serving the Spanish King, Carlos III ; and Part III with four chapters devoted to the continuous conflict between Anza and the heavily-entrenched Franciscans and factions within that religious order.  Chapter 10 is entitled, The Withering Vine, an apt title that Herrera explains.  He borrowed the phrase from John Kessell, Ph.D., his UNM professor and mentor, who had used it in reference to a sub-order of Franciscans, the Custody of the Conversion of Saint Paul. Several members, newly arrived in Mexico from Spain (peninsulares)  were assigned to New Mexico and were part of Anza’s continuous conflict with the friars.  Kessell characterized them as members of what had been a “dynamic, vibrant, and overly zealous order,” but  in Anza’s time (toward the end of the colonial period),  the order was “gasping for life like ‘a withering vine.”

Opening chapters entitled Anza’s Sonora, Child of the Desert, and Servant of the Crown offer basic information about Anza’s first four decades in Sonora and Arizona—his birth in 1736 near Fronteras, his elite Basque ancestry, marriage with Ana María Pérez Serrano (no children), and as a sixteen-year-old, following in the military career path of his late father, Juan Bautista de Anza I.

Indeed, the governorship of New Mexico in 1777 came as a result of Anza’s achieving between 1774 and 1776 his father’s unrealized dream of finding an overland route from Sonora to the Pacific coast.  To date, that is still Anza’
s best-known accomplishment:  opening a 1200-mile route in 1774 from present-day southern Arizona to the Bay Area of coastal California, and the next year (late October 1775 to late March 1776), leading a “fully equipped colony of Sonorans” from Tubac with soldiers and colonists and almost a thousand head of livestock to Monterey to establish what eventually became San Francisco.

As a result of that feat, the Viceroy in Mexico City rewarded Anza with an appointment as Governor of New Mexico in 1778.  The nine chapters of Part II and Part III aptly described Anza’s successes and failures there as a true instrument of the reigning Spanish king, Carlos III of the Bourbon Dynasty, and
are the “meat” of the book.  After the stunning defeat of the Comanche chief in 1779, Anza was not able to finalize Comanche-Spanish relations until November of 1785, when delegations of the main Comanche tribes—the Yupes, Yamparicas, and Cuchanecas—came to a site on the Arkansas River. The two most powerful chiefs of the Cuchanec Comanches, Ecueracapa and Canaquaipe, served as hosts and Eucueracapa was chosen by the Horse Lords (band leaders) to represent them in treaty negotiations with Anza and New Mexico Spaniards.  Coupled with their grudging respect for Anza’s prowess in killing Green Horn, the Comanches agreed that Anza’s “ peace by purchase” policy made sense—goods and increased trade to the Indians would be possible if they stopped raiding Spanish settlements and the pueblos of the Pueblo people—so a treaty was signed, and other peace pacts
followed with the Navajos and the Gila Apaches, though a lasting peace did not come before the demise of the Spanish empire in the New World.  Other chapters deal with Anza’s reformist administration in New Mexico.

Scattered throughout the book are numerous intriguing incidents that may cause readers to follow up with the books and articles listed in the bibliography. For example: Anza I (the father) and his dealing with the Planchas de Plata (chunks of silver) that caused a 1736 silver rush to Arizonac; Anza II (the famous son) and the story of his stunning defeat of the legendary Comanche war chief, Cuerno Verde, so called because of his green-horned headdress.  Even Anza’s attempts to subjugate New Mexico’s friars to the will of the state, especially after he received official patronage power over the church in New Mexico in 1783 was called “meddling,” by members of the religious order who had derogatory names for Anza, such as “despotic prelate.”

Anza’s request to be re-assigned was granted and in August, 1787, he returned to Arizpe, the capital of Sonora, happy to be home.  But his health was so poor, it deteriorated through 1788, and on December 20, 1788, Juan Bautista de Anza died. He was buried in a side chapel of Arizpe mission Nuestra Señora de la Asunción (Our Lady of the Ascension), known today as la Ygelsia.