The Anza Expedition crossed Los Angeles in 1776, bound north from what is now northern Mexico to establish the Spanish colonial settlement that would become San Francisco. A recent exchange of opinions among Anza historians leads to the consensus that Anza passed through Hollywood, the first of countless tour groups of visitors to do so.

The primary source for facts that led to this conclusion is the multiple diaries of the journey, most notably by the Franciscan priest Pedro Font and by the expedition commander, Juan Bautista de Anza. Original Spanish, and English, translations of these diaries are available to all on the Web de Anza.  In the early part of the 20th Century historian Herbert Bolton retraced the entire Anza Route of 1775 – 1776, using the diaries as guides. He published translated diaries and a map of the corresponding route and campsites, including descriptions of their locations relative to modern place names. Since that time Anza historians have generally accepted Bolton’s conclusions about route details.

In recent years a number of people have taken information about the Anza route from the original diaries,and visited the contemporary landscape to draw their own conclusions about exactly where the expedition traveled and camped.

Here is how newer studies arrived at a consensus about the Anza route through Los Angeles. On February 21, 1776, the Anza Expedition left the San Gabriel Mission and traveled west toward what is now downtown Los Angeles (See Map 1). They made camp that evening near the southern edge of the San Fernando Valley at a place they called El Portezuelo (The Pass). The Hollywood Hills of modern Los Angeles separates the Los Angeles Basin proper from the San Fernando Valley to the immediate north. In 1931 Herbert Bolton, as shown on Map 1, wrote that Anza had passed north of the Los Angeles Basin, following the Los Angeles River around the east end of the Hollywood Hills, skirting contemporary Griffith Park, through the Glendale Narrows and into the San Fernando Valley. The present and immediate past presidents of the Anza Society, avid trail detectives Phil Valdez, Jr. and Joe Myers, have studied this route independently and concluded otherwise. They believe that the expedition traveled as shown by the green arrow route on Map 1, south of the Hollywood Hills, approximately where Sunset Boulevard runs today, crossing beneath the present location of the famous Hollywood Sign. Anza then turned northerly into Cahuenga Pass, crossing the Hollywood Hills by roughly following the route now occupied by the Hollywood Freeway. They stopped to camp somewhere close to the south side of the San Fernando Valley. “El Portezuelo” is the Cahuenga Pass, the final portion of the green arrow route that crosses the hills on Map 1.  Myers and Valdez are always quite thorough and systematic in their Anza field studies, using field comparisons of contemporary geography with original journals, travel times, distances and maps to see what route best fits all available information. Phil Valdez, Jr. has pointed out that the vistas and arrangements of landmarks described by Father Font that day could have been seen only from the Hollywood route, not the Los Angeles River route. He writes “Bolton is total (sic) wrong and disregards not only distance (but) direction, and description which are so vital in pin-pointing the route today.” The late Anza scholar Alan Brown also concurred, writing in 2011 that the location of the campsite of February 22 was “Hollywood, at the S end of the Cahuenga Pass”. He based his conclusion on an analysis of all three versions of the expedition diary written by Fray Pedro Font. I believe Brown was correct about the route but mistaken about the campsite, placing it on the south side of the pass, near the contemporary approach to the Hollywood Bowl. Based on distance and direction the next day, when the expedition entered and passed through the San Fernando Valley, the campsite must have been at the north end of the Cahuenga Pass, near the current location of Universal Studios. Thus Brown had placed them overnight at the wrong tourist attraction.

When I first read these recent opinions about the Cahuenga route I was hesitant about their conclusion. There is a consensus that in 1774 Anza went around the north side of the Hollywood Hills at the Glendale Narrows. Why would he have changed his route? I argued that Anza would have chosen to go the same way again in 1776 because remaining near the Los Angeles River would have followed the path with the least abrupt elevation change. It is an elevation gain of approximately 700 feet (213 meters) from the south side to the top of Cahuenga Pass, over a distance of 1.5 miles (2.4 km). The river route would also have
provided the travelers abundant water, firewood, and feed for livestock. These numerous advantages caused Anza to follow rivers for most of the long journey. Christopher Richard weighed in for the Hollywood route and gave another reason why Anza would have decided to go a new way.  Using historical maps, he wrote; “the area labeled Providencia (immediately west of the Glendale Narrows) would have had numerous seeps, mires, sausals, and other riparian thickets; in short, not a good area for travel with hoofed animals. The relatively small elevation gain & loss over Cahuenga Pass would have been readily offset by the better footing for the livestock.”  Upon reflection, I must agree with him. There were in fact seasonal quagmires at the Glendale Narrows, where bedrock rises to the surface and forces underground water to come to the surface. This is the only place between the San Gabriel Mountains and the Pacific Ocean where the bed of the Los Angeles River was not paved with concrete in the early 20th Century for flood water management, and the high water table is the reason why. Richard’s historical topographic map shows that the broad flood plain of the Big Tujunga Wash and other southerly flows from the canyons of the Western San Gabriel Mountains laced the southern end of the San Fernando Valley with a chain of wetlands (Map 1). Channelized and contained as they are now, these rivers still carry heavy water flows during unusually wet winters, and the ensuing floods can still make seasonal lakes in Valley locations such as the Sepulveda Basin.

The argument in favor of the Hollywood route is further strengthened by the weather that particular winter. It is clear from Font’s diaries that it had been rainy at the very time they crossed the Los Angeles area (Dec 1775 – Feb 1776). As the Anza Expedition crossed Los Angeles on February 21 Font describes very miry ground created by the rains, which caused the pack train to fall behind the rest of the expedition. Earlier in the winter, on New Year’s Day, they had taken an entire day to cross the swollen Santa Ana River at the City of Riverside. On the other hand, they reported no difficulty three days later in crossing the flood plain of the mighty San Gabriel River as they approached the San Gabriel Mission, although Font noted the wide alluvial fan that still exists at the mouth of its mountain canyon. Not long before Anza arrived in the winter of 1776, the San Gabriel Mission was moved north from its original location due to flooding of the San Gabriel River. Anza’s group crossed the Los Angeles River on February 21 just before entering Hollywood, again with no difficulty noted.

There are very limited records, outside of the travel diaries, of winter temperatures and precipitation in California at that time. Font’s diary reported that it was quite cold, sometimes bitterly so, and wet when they crossed the Sonoran desert of southeastern California. Over a period of two weeks in late December there were six days with various combinations of snow, sleet, rain, and fog. People suffered and many animals were lost or died. After the expedition crossed the Santa Rosa Mountains and entered the coastal valleys of Southern California Font reported that the soil was moist and green with new vegetation. No doubt the cavalcade of winter storms, which generally are widespread and travel from west to east, was the cause, as they are today, of the wet soil and the winter greening of the landscape. The combined diaries of Font and Anza report that it rained 14 of the 20 days of February before their departure from the San Gabriel Mission.

So there had been at least 2 stormy months by the time Anza left the San Gabriel Mission, leaving local soils and wetlands at or near saturation. The Glendale Narrows and southeastern edge of the San Fernando Valley against the northeastern flank of the Hollywood Hills may well have been flooded. If so Anza probably would have learned about it during his stay at the San Gabriel Mission, or from his scouts. If that were the case, we have no written record about his decision to change his route to Cahuenga. Anza was a busy soldier, and his diaries are confined to brief descriptions of matters of immediate importance, and do not include deliberations behind his decisions. Anza wrote just seven sentences about travel on February 21. One of these said, ”Notwithstanding that for a number of days past it has not rained very hard, the road has been so heavy that many of the mules which carried the loads fell down”.  It would seem then that the ground they crossed that day was muddy and difficult.

So then, we have all concluded that Anza went north across Los Angeles one way with his soldiers in 1774, and another way with the colonizing expedition in 1776. Obstructions on the ground, such as swampy areas and deep rivers are difficult to imagine most of the time today, because they have long since been drained, directed underground, or diverted so as not to impede the daily activities of a huge city. Even so, with enough imagination to erase Sunset Boulevard, the Hollywood Freeway and the Hollywood Bowl from the landscape, we can then restore wetlands and widely fluctuating rivers and streams while imagining a skillful and resolute soldier leading 240 souls to a new life in a largely unknown land. 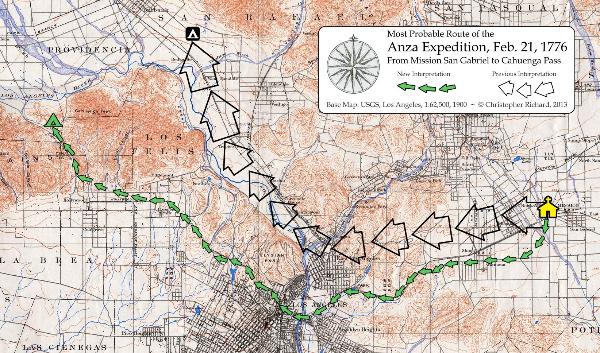 Map 1.  Anza route of February 21, 1776 (green arrows) from the San Gabriel Mission (yellow) to El Portezuelo (green tent). The Bolton route (large arrows) ends at the Glendale Narrows (black tent). The Hollywood Hills are at the center left, between the two routes. This historical topographic map of approximately a century ago shows Los Angeles as a small city at the bottom center. The area labeled Providencia at the upper left shows the confluence of multiple tributaries of the Los Angeles River, creating a seasonal wetland. Map by Christopher Richard.

I am grateful to Christopher Richard, Phil Valdez, Jr., and Joe Myers for generously contributing ideas and information to the discussion that made this paper possible. I thank Steve Ross of the Juan Buatista de Anza National Historical Trail, National Park Service, for soliciting our opinions on this question in the first place.

Additional information about the Anza Expedition of 1775-1776